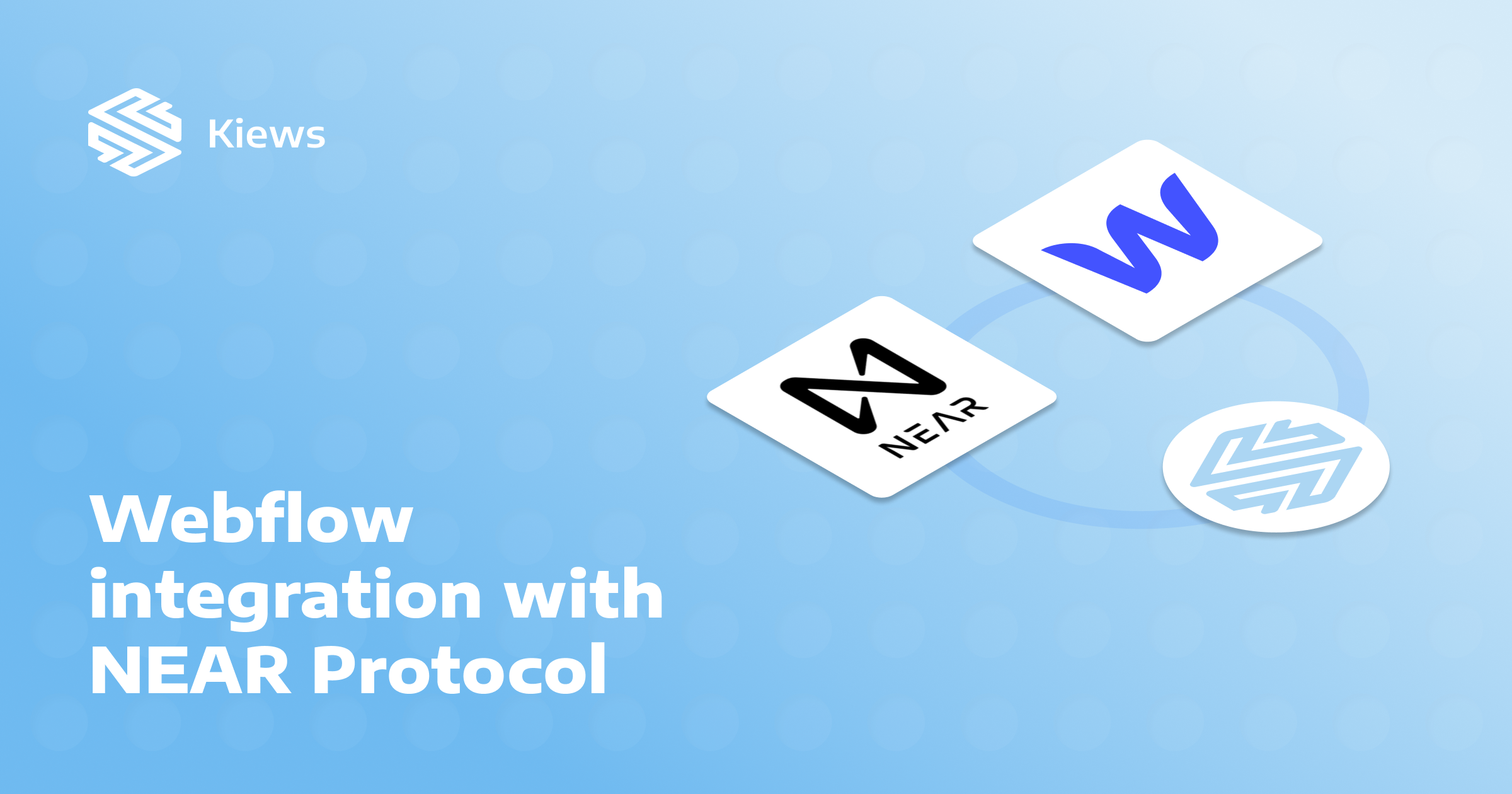 Webflow plugin for NEAR Protocol

It's no secret that today the world has plunged headlong into a new era of digital technology. More and more people are exploring cryptocurrencies, NFTs, blockchain and learning how to use their benefits in everyday life. In this article, we will talk about how Webflow, one of the most popular no-code platforms, was integrated by us with the progressive and popular Near Protocol blockchain.

Blockchain is great, but what is it?

Blockchain is the latest technology, the interest in which has grown along with the popularity of cryptocurrencies. Today it is widely discussed not only in the world of finance. Blockchain is already being used for storing and processing personal data and identification, in marketing and even in computer games.

Blockchain is a decentralized database that is simultaneously stored on many computers connected to each other on the Internet. It can be compared to a necklace, each bead (block) of which is a record of the action, and the chain cannot be broken. Blockchain is an indestructible digital record of actions.

All over the world, this technology is actively used to transfer cryptocurrencies. If you sent cryptocurrency on the blockchain, thousands of computers around the world will confirm and save all the information about the transfer.

How are NEAR Protocol and blockchain related?

The answer to this question is quite simple: NEAR Protocol is a first-level blockchain that uses a unique sharding technology called Nightshade to achieve scalability.

Learn more about NEAR

What is the essence of the project?

As we wrote above, NEAR Protocol is a young but rapidly developing project. One of the main tasks of NEAR is to make its platform as accessible as possible for every person. That is why they are open source, where everyone can contribute to the development of NEAR and there is a huge number of training courses and grants at NEAR University for developers of any level.

The goal of our project to integrate the NEAR Protocol with Webflow came from the idea of ​​extending the availability of the NEAR Protocol. Both no-code and low-code platforms used by millions of web developers are perfect for this integration.

The main task of the project is to create basic and easy-to-write plugins for no-code and low-code platforms for educational purposes, which will serve as a great start for the following developers who will complement, extend and improve these plugins in the future.

An equally important element was the fact that all plugins that we develop for the NEAR Protocol must be accompanied by technical documentation and training tutorials. Thus, anyone who wants to use plugins for their needs can easily understand how they are written, how they can be modified and improved.

Why did we choose Webflow?

Webflow platform was chosen primarily based on its popularity among both the users and the developers, as well as its range of supported environments (like mobile) and other API integrations.

Thus, Webflow has made it to the top 2 in 2021, according to an annual report by Codemap below of the no-code/low-code industry.

How do plugins work?

At the moment 7 plugins have been developed to use the basic functionality of NEAR. Further collection will be replenished as the demanded functionality is realized. Plugins are developed and can be used for Webflow, as well as for other html pages.

The plugins are created as a Code snippet that you can place on your local page.  All you need to do is build the structure of the page with the elements you want to use, open the desired plugin in Plugin Builder and fill in the fields required for your task. After that all you have to do is copy the two pieces of code and paste them into your page. Interactions with Near protocol are based on the NAER-API-JS library, which you can read about in detail here.

What was done in the project

As part of the NEAR integration project with the Webflow platform, we have developed 7 different plugins. Our Webflow experience is probably one of those integrations, where everyone should watch the videos and check out the template, because we made sure that each method generates a code snippet that can be ctrl-C, ctrl-V-ed in other environments as well.

Note: Unfortunately, some videos do not have English dubbing. To play a video in English, you need to open the video settings, select the subtitle function, click on the translate button and select English. We wish you a pleasant viewing!

Learn more about the project