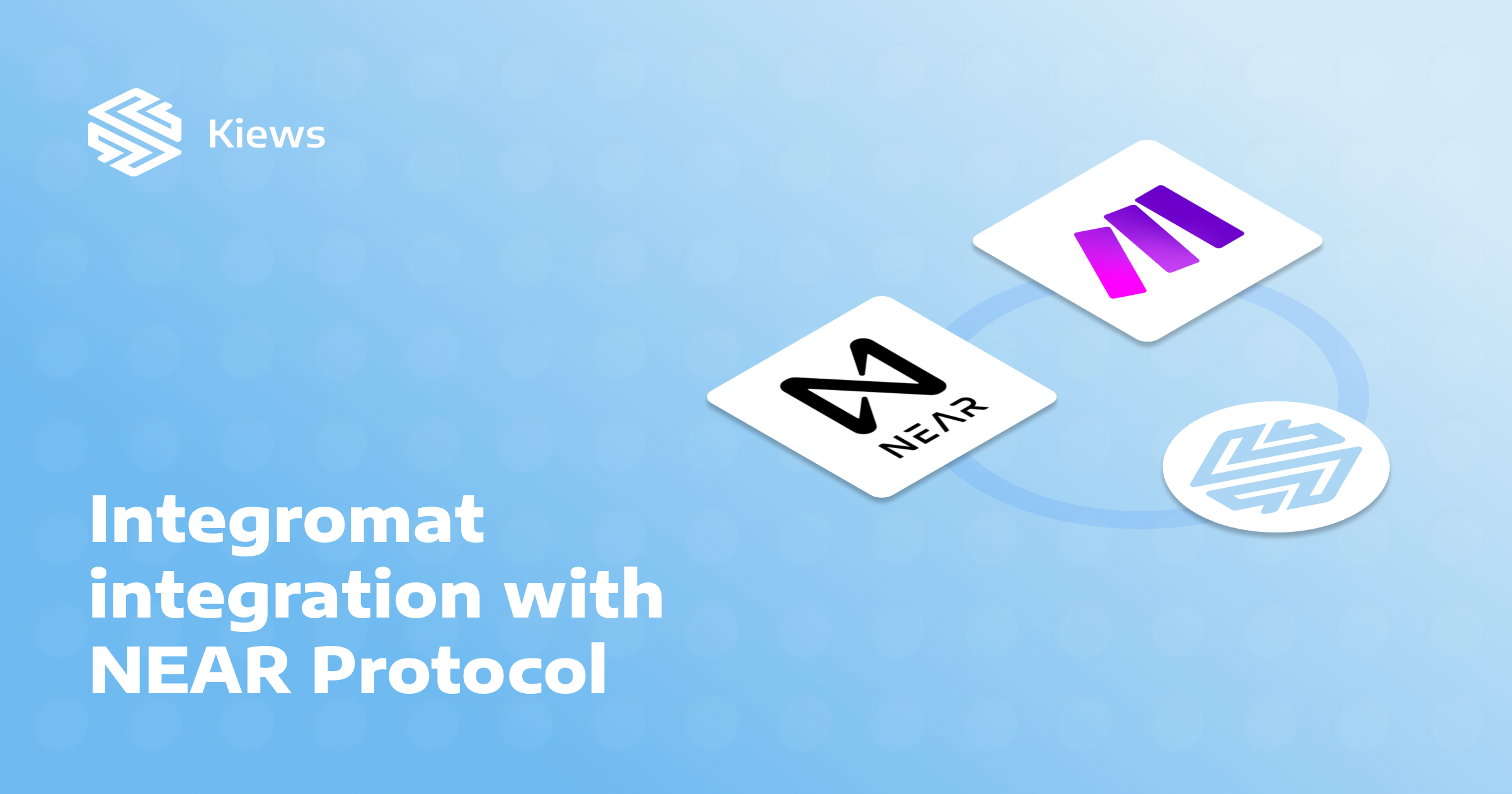 Integromat plugin for NEAR Protocol

We continue to talk about the integrations created by our team as part of the NEAR University project. Today we will talk about integrating HEAR with the Intergomat platform, an online automation tool that allows you to exchange data between applications without writing code. Read the article to learn about the plugin development process and how it can be useful.

Before moving on to the plugin itself and the process of creating it, we should get to know NEAR and talk about the purpose of the whole project.

NEAR is a decentralized application platform that makes blockchain accessible to everyday people who are excited for the future of the Open Web. A web that is more private, more secure, and puts people in control of their money, data, and identity. NEAR's purpose is to enable community-driven innovation to benefit people around the world.

What makes NEAR special?

1. NEAR is the inevitable evolution of existing platforms

▸ Bitcoin made digital currency a reality, a global transfer of value programmed on a blockchain. Ethereum took it a step further and made it possible to create basic applications of leveraging digital currency on blockchains, but has faced issues with scaling and prohibitive fees.

▸ NEAR solves these challenges and finally makes building the Open Web possible by introducing a breakthrough sharding design that creates opportunities for innovation never possible in blockchain before.

2. NEAR is made for the real world

▸ NEAR is the fastest path to market for builders to create blockchain applications that are as easy to use as they are to build. It uses common development patterns and programming languages ​​that are immediately familiar to web developers.

▸ NEAR was built with pragmatism of a Silicon Valley tech startup by engineers who have shipped scalable solutions for the world’s leading technology companies.

▸ NEAR is secure enough for high value assets like Digital Currencies or Identities and performant enough to scale for DeFi or Gaming applications without prohibitively expensive fees or network latency.

3. NEAR is designed to be interoperable

‍▸ NEAR is designed to work with existing blockchain platforms and is easy for existing applications to migrate to.

▸ NEAR uses the Ethereum Virtual Machine and Web Assembly so that builders can seamlessly swap from Ethereum to NEAR (and back) on the NEAR Rainbow Bridge to leverage the performance, security, and favorable economics of NEAR without having to rebuild their applications or smart contracts.

▸ With NEAR, you don't have to choose between NEAR and Ethereum or commit to only one blockchain. Interoperability and usability across platforms will be key to the mass adoption of blockchain.

NEAR is the first blockchain platform truly built for the real world. It is a builder's fastest path to market to create blockchain applications that are as easy to use as they are to build. Using NEAR technology you can start building your new projects in the new economy today, and the plugins that we have developed can greatly facilitate your way to WEB3.

Purpose and essence of the project

Our project to integrate the NEAR Protocol with Zapier came from the idea of ​​making the NEAR Protocol more widely available. Both no-code and low-code platforms used by millions of developers are perfect for this integration.

The plugins are written in such a way that they can be easily extended and improved by following developers. The main focus of the project is to make it easy for the developers to get started with coding and plugin development, without having to learn all the basics first.

The plugins are written in a simple and easy-to-use manner, so that they can be used by novice developers who are just starting out in this field. The project also includes detailed documentation and video tutorials, so that the developers can get started right away.

Integromat and its value for the project

In the previous article, we talked about the platform, which is a universal online automation designer - Zapier. Services like Zapier and Integromat are the glue for most multi-service no-code solutions. Such a backend. In addition, many people use them for personal purposes to optimize their daily routine. These services tend to work with most known platforms, which makes them really useful.

Integromat has been identified among the top 3 automation/integration tools in the report by CodeMap (see the table below for more details).

Integromat is an automation platform that

...lets you connect apps and automate workflows in a few clicks. Move data between apps without effort so you can focus on growing your business.

The platform has many integrations including AWS, Google Drive, Google Docs, Slack and lots of others.

The basic building blocks of the platform are modules. These modules perform specific tasks like sending emails, fetching files from Google Drive, uploading files to AWS S3, etc. You can combine these modules to create a scenario which can be triggered by a schedule or by a third party action, e.g. you received an email, or edited a spreadsheet. This is very useful for automating certain workflows like sending an email to your accounting team whenever you change some numbers on a spreadsheet, or you want to send an email to yourself when NEAR Protocol configuration changes.

Use cases for no-code platforms

It is also important to note that all platforms chosen for integration are not just used to build e-commerce websites or automate emails, they are also used for messaging, analytics as well as for storing information on the cloud. The below list of all the functionality supported by these platforms is a great illustration of how widely usable these platforms can be, despite being considered low-key effort.

More about the integration of NEAR and Integromat

This platform was very unique and challenging from the technical point of view (because we had no way of using NEAR JS SDK here), but thanks to our stellar developers, whose time to market for this project was 2-3 weeks from start to finish, we are able to present this integration.

When creating a custom app in Integromat, you don't have access to the NPM ecosystem, so you have to rely on REST or GraphQL calls to third party APIs to do the heavy lifting. Fortunately, there is nothing preventing you from performing calls to the RPC API. You can just call the same endpoint like in GraphQL, and pass in parameters in the body, which will get serialized as JSON by Integromat.

What I did for this app is basically go through the RPC API documentation and create a module for each of the endpoints available. The documentation is pretty clear, with examples and descriptions for each endpoint, as well as error explanations. And if you find yourself in a situation where you can't figure out how to handle a certain action/endpoint, don't worry I had my share of deer in the headlights look, and the best way to get out is by checking how things were handled in the near-api-js library.

To see what a final outcome looks like, check out a snippet from a demo video below, where an ability to get notified if something changes on the NEAR blockchain as a feature was illustrated.

IML (Integromat Markup Language) functions are custom JavaScript functions that can be called from within the IML json templates. These functions are like normal JavaScript functions with ES6 (ES2015) syntax/features and also have the Buffer class available. They are mostly used for formating or more complex branching logic. In our case, Petar used them to make code more readable, or in some cases to make certain goals achievable at all.

For a more technical walkthrough of this integration, please head to our custom-made youtube playlist of all the 6 major steps that our developer took to make this magic happen.